“The date was June 5th, 2019. The start of the apocalypse. Google was ground zero. The facts are still coming to light, but it’s clear the internet will never be the same.”

It sounds like a great intro to a Hollywood Blockbuster, unfortunately, we’re not making this up. As users of the internet, we are accustomed to algorithm changes. In fact, we sort of celebrate the potential changes.

With every update, we had the chance to rank higher, to receive better results, and the increased likelihood of being found online. Rarely, if ever, did we consider the possibility of our current reality being flipped on its head.

For years, Google continued to look out for the interest of its users. Businesses thrived, and content sparked conversation and debate. Google was a tropical oasis for businesses both big and small. That was until a week ago for some industry-specific businesses.

How did we get here?

Google confirmed the implementation of a new core update with a series of tweets. As users of the internet, we read those tweets without much resistance, trusting in our “benevolent caregiver” to bestow another blessing on our businesses – and hopefully, our bank accounts.

Tweets from Google’s Search Liason are important. Through this account, Google forewarns users of potential changes.
From that standpoint, we should’ve known, right? However, as the business world imploded, users looked back at these tweets and felt Google did not do a great job of being transparent regarding the effectiveness of the new update. We knew it was going to be big, we just didn’t know it was going to cataclysmic, atomic bomb big.

What was the purpose of the update?

The June 5th Google Core update completely disrupted the fabric of space and time – not really, we added that for dramatic effect – still, the update spelled doom for a number of online businesses.

In a recent attempt to diversify search and ranking results, particularly for results found on the first page, Google initiated a new update. Users were notified on Twitter through the Search Liason account. 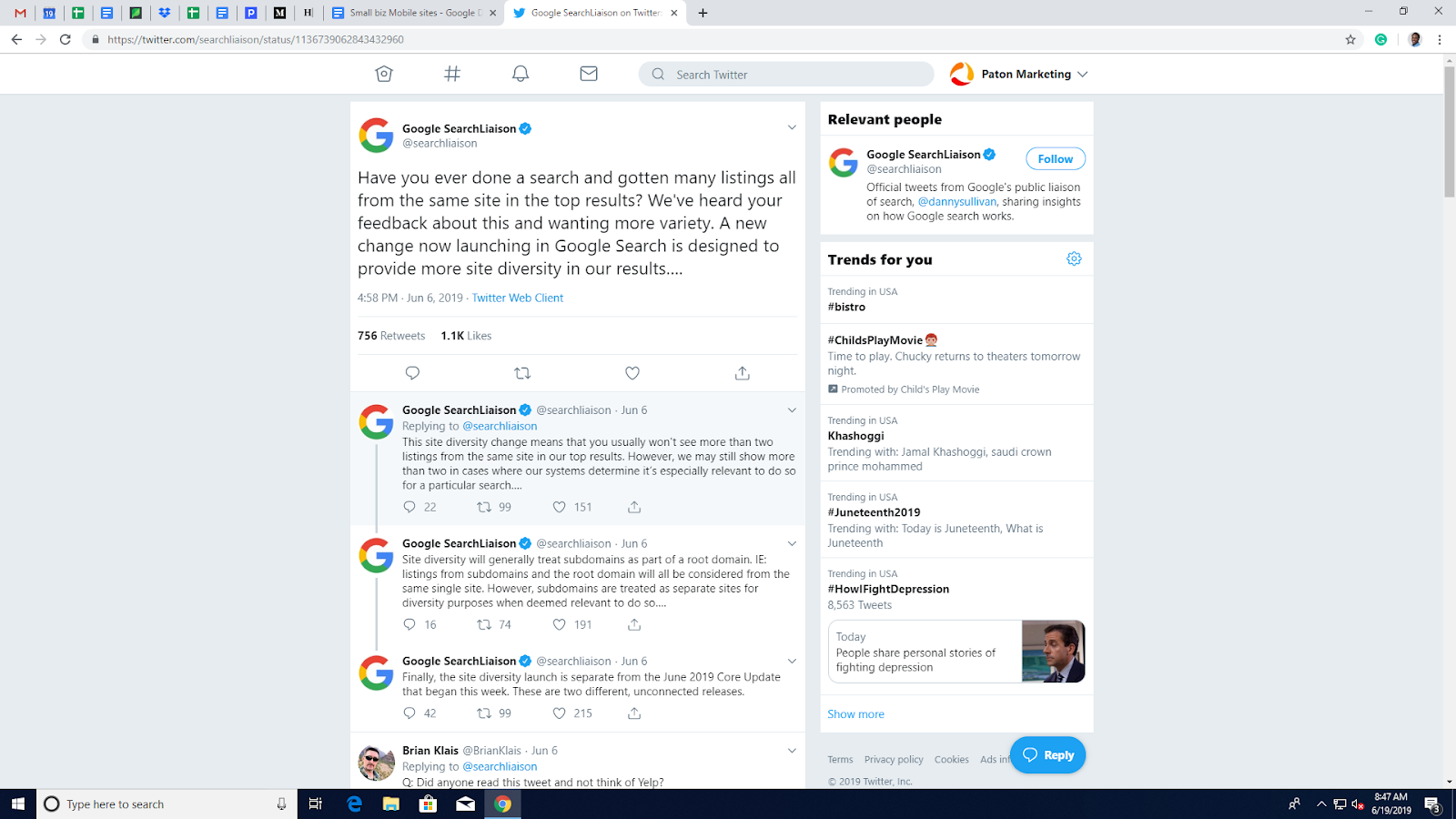 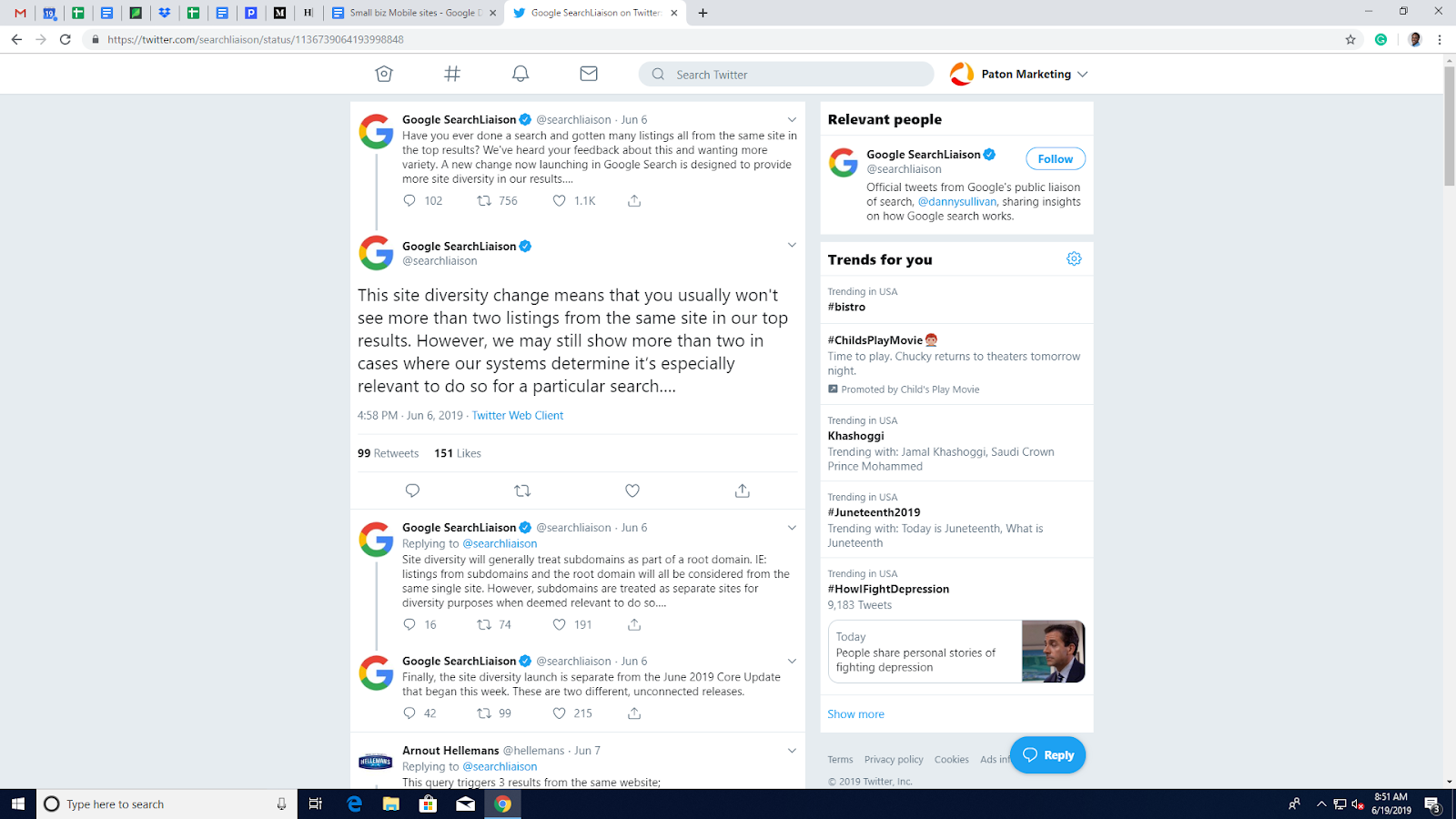 Why? It was clear to Google, certain industries were becoming monopolized. In defense of the search engine behemoth, they were right.

Big businesses that could either afford to purchase the top spot or produce an endless barrage of content surrounding their particular industry controlled the coveted number one spot for a huge amount of keywords and phrases.

Essentially, this boxed out the medium-sized or smaller sites from ever getting the chance to appear on that coveted first page.
In order to clean up search results, Google sought to group subdomains and root domains together. 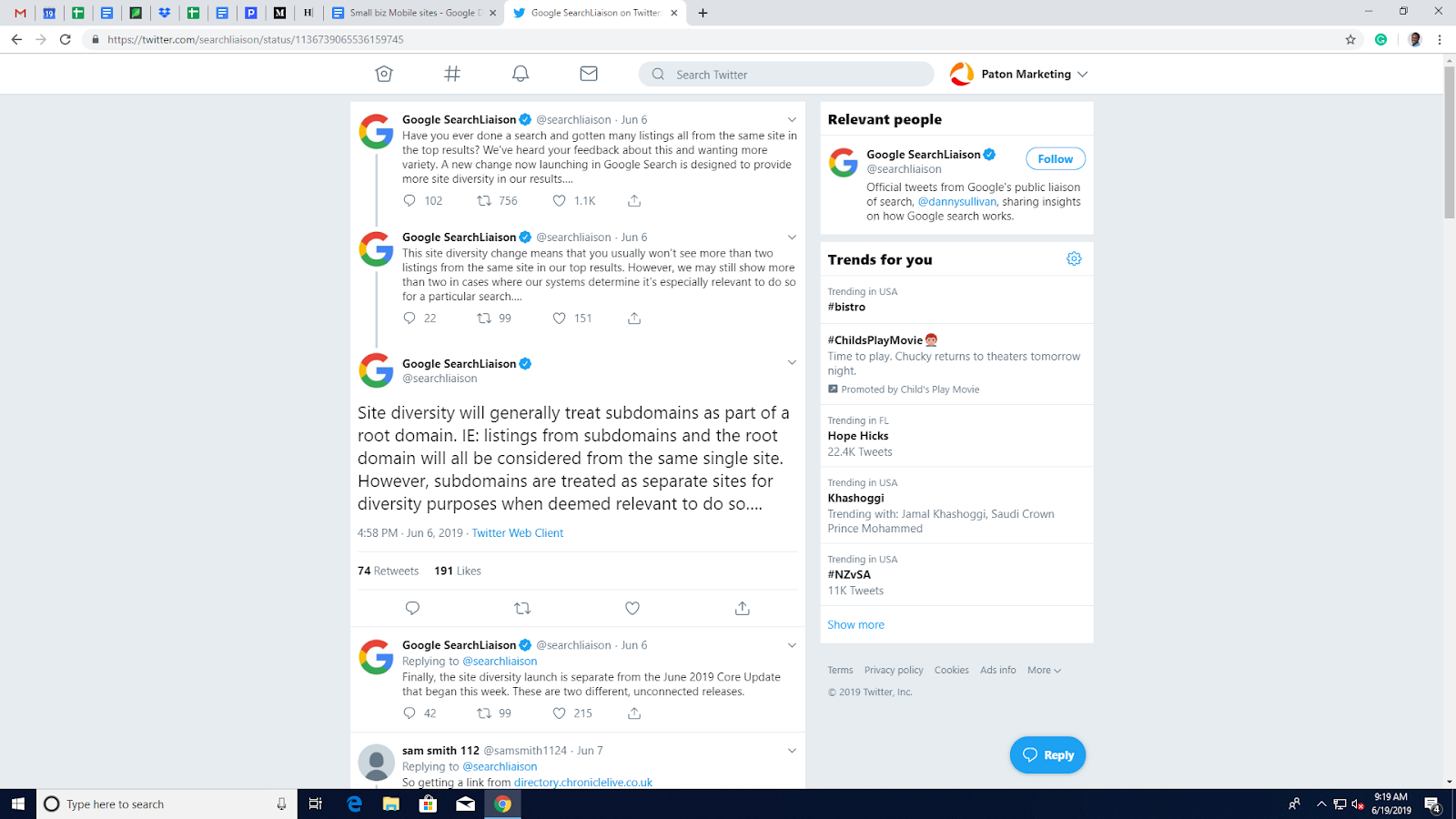 So, businesses with multiple sites associated with their main website were grouped together, clearing space on the first page.

So here lies the problem.

Clean up the search results and give the user more search diversity and options but sacrifice the more established sites from popping up in those results as often.
It seems fair, but for some businesses, this came at a tremendous loss.

Still, a few questions remain. Why are sites with single domains in specialized niches being affected? What were Google’s parameters when deciding who got the ax and who didn’t? Finally, what counts as a “relevant subdomain”?

As if Thanos snapped his finger inside the Infinity gauntlet, website traffic for a number of online businesses tanked. Drops ranging from 28% to as high as 71%.

Some businesses fell so far, they could no longer afford to stay in business. The June 5th Update signified the end for CCN, a popular cryptocurrency media news-site.

Huge sites even experienced a drop; from the Daily Mail to the NFL – Yes, even the NFL experienced a fumble in their website traffic.

So, how did this happen? We don’t know, however, we are under the suspicion that keywords targetted for specific industries.

To get a better understanding, let’s look at the markets that experienced the biggest drops.
This information comes from our friends at RankRanger (@RankRanger)

Think of there being a normal amount of fluctuations that generally takes place. The 159% increase is an increase from that norm. As if to say, rank is 159% more unstable than it was during the baseline period. – Mordy (@RankRanger)

Theoretically, if Google were to target certain niches and popular keywords used within these niches, any business creating content and using the now “affected” keywords would experience a drop.

Using the same hypothesis, if large amounts of content have been produced containing the affected keywords, website traffic should drop considerably. Could this be the reason so many sites experienced a drop in website traffic?

The NFL has nothing to do with these affected industries, yet, sports gambling has become a major issue in recent years. If the NFL were creating content around sports gambling, even rejecting the concept while including affected keywords, this might explain why they experienced a drop in traffic.

How could Google let this happen?

Google doesn’t know what happened. Google doesn’t even fully understand how their RankBrain program works. Yes, you read that correctly!

So, let’s update you, just in case you don’t understand what’s going on here. We have the biggest and most popular search engine in the world, home to billions of users and businesses, initiating a new update to a program they don’t fully understand.

Again, we wish this was the premise for a sci-fi/action flick, but we’re sorry to report – THIS IS REAL.

In a recent development, Google’s Seach Liason, Danny Sullivan corrected the fearful masses on Twitter stating the June Core Update did not include the site diversity launch.
The site diversity launch was an update all of its own. However, both were rolled out simultaneously. So, we could be blaming the wrong culprit.

However, it’s also fair to say, maybe the update worked the way it was intended. Maybe we’ve been flooding the internet consistently with low-quality content and subdomains in order to increase our SEO rankings. The update did its job and punished all the cheaters.

Or maybe it’s something a little more malicious. The Daily Mail in the UK has been hit before. The newspaper was hit by the March 2018 update and again with the current June Update. Why would a popular news site be deemed a repeat offender?

Some people speculate Google is trying to restrict news articles appearing on more than one news portal.

If so, certain news sites will become the main distributors of news, creating more exclusivity within the medium. So, like an Orwellian dystopia, one company/institution would be in control of all the news and media, controlling what we hear and see.

How can we resolve the issue?

The solution is still unclear, but we do know SEO firms will be the digital firefighters for the near future.

And just like firefighters, SEO firms will need to assess the situation before we can put it out.

We’re still not exactly sure what Google “nerfed” as part of their recent update, but until Google can give us a straight answer, we will continue to try and test out each option in an attempt to help your website rank.

The unknown may seem daunting, however, as users of the internet, we cannot forget results on the internet aren’t guaranteed either. So, while SEO firms are battling the flames, here are some things to consider:

We’re only seeing the tip of the iceberg. Let’s get a little deeper before we abandon ship.

As a business, you may be able to attempt these challenges alone, but by enlisting the aid of an SEO firm, you’ll have the best chance to survive.

Just as quickly as the apocalyptic Google core update comet came, when it seemed like certain industries and niches were doomed to be stranded in the post-apocalyptic wasteland forever, life found a way.

So what is the good that came from this? Let us explain…

To level the playing field and in the best interest of the user, it is our understanding Google targeted these niche markets, devaluing their effectiveness. By eliminating the 1st-page ranking monopoly that existed for the big dogs, Google was able to give searchers more variety and diversity when looking something up on the search engine platform.

This was a proclaimed effort to help the smaller guys in the game rank. While certain big domains suffered, other domains with less authority ranked higher and ultimately thrived.

One business owner and search engine enthusiast, Stephen Hockman (@StephenHockman), had this to say regarding the update, “A site of mine tanked from top 10 results to positions 90+ for every keyword from the March 2019 update. Then on June 3 rankings snapped back to normal. I was literally going to abandon the site. Not now :)”

So what does this tell us? Well, it shows there is hope for one thing. It also shows that things are changing daily and what happens this month can change and even be undone in the upcoming months once more updates are live.

So while some sites and businesses suffered tremendous losses, some came out way farther ahead than they would have had the update not happened. Now it is important to closely monitor where your domain ranks and see what, if any, changes are taking place.

The more informed you are, the better you can adjust your strategy as a business. So keep your ear to the ground and look out to the horizon because, in the world of SEO and Google, nothing stays the same for too long.

Paton is a customer-centric organization and our work does the talking for us! Over the years, we have built a path of success for many valuable clients helping them achieve a greater presence in highly competitive industries.

Paton is a customer-centric organization and our work does the talking for us! Over the years, we have built a path of success for many valuable clients helping them achieve a greater presence in highly competitive industries.

Paton Marketing is a dynamic online marketing agency based in Miami, Florida. Being a leading digital marketing agency, we strive to assist our clients to dominate the market in their industry verticals over the Internet. We are passionate strategists who help businesses create, manage and monitor effective Internet marketing plans. Our customized strategies and techniques enable you to drive targeted traffic to your website and also improve conversion rates.

3 Marketing Tactics Small Businesses Should NOT Invest In